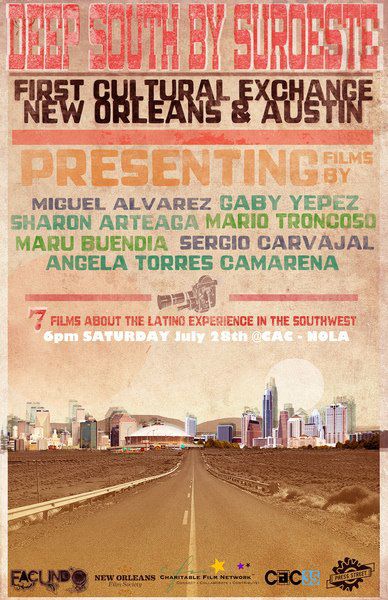 Filmmakers in Austin and New Orleans will soon have a new venue for showcasing their creative talents, thanks to a new film exchange called “Deep South by Suroeste.” The film exchange, also know as DSXSO is the brainchild of two New Orleans based non-profits – Press Street and Charitable Film Network, and the Austin
based transmedia collective, Facundo International, Inc.

Deep South by Suroeste will host a free public screening of Spanish and English language short films that focus on the Latino experience in the southwest.

The roster of award winning films includes two Cannes short film selections by Angela Torres (Mexico) and Mario Troncoso (Spain), and impressive works by two of the most important Latino filmmakers to have come out of Texas in recent years, Miguel Alvarez and Maru Buendia-Senties, and up-and-coming filmmaker
Sharon Arteaga from Corpus Christi. Two medium format shorts by South American filmmakers Gabriela Yepez (Peru), and Venezuelan-American Sergio Carvajal will also be featured. Filmmakers in attendance will participate in a short discussion immediately following the screenings.