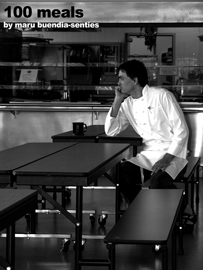 100 mealsTRT: 10:02 In “100 meals” , Chuck Dawes, chef of the ARCH (Austin Resource Center for the Homeless) kitchen at Austin finds the opportunity to provide for the homeless a home-like feeling as they sit down for a warm meal that is worthy of five star restaurants.   The documentary deals with human principals of interaction and behavior within social relationship, and the attempts made to socialize with others and feel accepted, while trying to give something back to society. “100 meals” was awarded first place under the category of documentary at the COMBO Film Festival in Cd. Juarez, Chih., Mexico in 2006. The documentary has been screened in major border cities along the Northern border between Mexico and the United States.